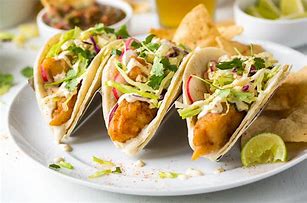 Taco’s have been around for years……Taco’s actually make people SMILE!  Ever see anyone run in the opposite direction when you say “Thought I’d fix Taco’s tonight”. (?)  The thing is Taco’s have taken a new twist.  It seems Fish Taco’s are “thee thing” nowadays.  Ever had one?  I’m a California Native who grew up on Mexican Food.  Just the thought of a fish taco had me absolutely running in the other direction…..UNTIL….I caved.  And I caved BIG!  I never imagined that something I was so “hesitant” about ended up being so “heavenly” instead.  There’s something about COD as the choice of fish with a light splash of Lime, a bit of crunchy cole slaw and a dribble of tarter sauce.  Vero Beach and Sebastian have some great seafood restaurants and many with a view!  So here we are…..Taco Tuesday!  Why not try a Fish Taco today?  Just “Step” out in Faith and “Dive” right in!