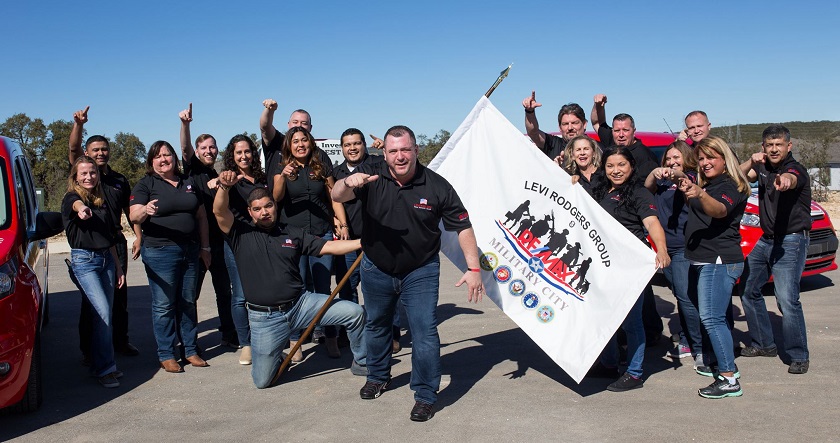 Levi Rodgers is a decorated Green Beret whose commitment to serve others – and support those who defend and protect the country – didn’t end when he retired from the U.S. Army and embarked on a real estate career.

That much was evident when his team, Levi Rodgers Real Estate Group at RE/MAX Military City in San Antonio, was honored with the 2019 Secretary of Defense Employer Support Freedom Award, the highest recognition given by the Department of Defense to employers for their exceptional support of U.S. National Guard and Reserve members.

“It’s an absolute honor,” says Rodgers, who is also Founder/Owner of RE/MAX Military City. “I mean, the Secretary of Defense called our office. It’s pretty cool when somebody who’s worried about North Korea and Iran and everything else the President may have him worried about would take the time to call us and let us know we’ve been selected for this.”

Levi Rodgers Real Estate Group was one of only 15 Employer Support Freedom Award recipients chosen this year out of 2,415 civilian employers nominated and is believed to be the first real estate entity to receive the award since it began in 1996. The RE/MAX team of 15 agents and 14 support staffers stands alongside such corporate giants as Nationwide Mutual Insurance Co., Archer Daniels Midland, Chevron, Barclays and Cracker Barrel. This year’s award recipients were announced in mid-June and will be honored Aug. 23 at a Pentagon ceremony in Washington, D.C.

Helping the People Who Help People

The team led by Rodgers, who earned a Purple Heart, Bronze Star and Legion of Merit for his own service, was nominated for the Freedom Award by his office’s manager of front-end operations, Ricardo Pacheco, a member of the Texas National Guard. Pacheco wrote in his nomination about the support he and his family received while on deployments to Somalia and Hurricane Harvey, as well as during his usual National Guard commitments: one weekend each month and two weeks out of the year.

“True story – I wrote the nomination while I was in Somalia,” says Pacheco, who is pursuing his real estate license. “I didn’t think much of it. I was just trying to put my words together. I’m still humbled about it every day.”

The support provided by Levi Rodgers Real Estate Group during Pacheco’s deployments went beyond continued paychecks and benefits. For example, during Hurricane Harvey in 2017, as Pacheco and his unit were pulling stranded people out of vehicles and houses in Houston, Rodgers and other team members sought to comfort the unit, stocking up at Sam’s Club on beef jerky, chewing tobacco, “things soldiers like when they’re stressed out,” Rodgers says.

“We went around, from station to station, met them in the field and delivered things to them,” adds Rodgers, who points out his compassion in the face of Hurricane Harvey had a pragmatic side to it:

“We’ve got a lot of organizations helping the people who were affected by Harvey; but who’s helping the people who are helping the people?” he recalls thinking. “It’s just like they say when you board an airplane: ‘If we lose cabin pressure, oxygen masks are going to fall from the ceiling. Before you put the oxygen mask on others, put it on yourself.’ If you yourself run out of oxygen, you can’t help people. If they become demoralized, or lose their will to fight, then everything is going downhill.”